Several weeks ago, I wrote a post on my favourite desserts. Since then, someone has recommended me to try out a dessert called ‘Chocolate Durian’ cake from Just Heavenly. I must say I was quite skeptical in the beginning. Particularly when I recalled a story from my secondary school days. A friend brought chocolate cake to school, but it had a strange durian scent. Apparently she was not aware that her brother kept durian in the refrigerator right next to her chocolate cake Hahaha, trust me it did not taste good!

After much deliberation, last Saturday CheeseBoy and I gave it a try.

From the outside it looked just like another ordinary cake 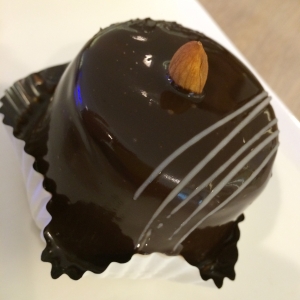 But check out what’s on the inside.

I really don’t know how to describe it, all I can say is it is SO SO HEAVENLY. It has similar filling like Lai Po Heen’s durian pancake, but this one has chocolate on the outside instead of the crepe. Nonetheless, both are equally super yummy. It’s one of those desserts that gives you a pleasurable, tingly feeling every time you took a bite. For RM13.90 per piece I think it’s so worth it!

CheeseBoy really enjoyed his dessert. I was so thankful that he recommended for us not to share the cake despite our first time trying it out.

How I wished I had discovered this amazing cake sooner. Particularly since I am a frequent visitor to BSC…gggrrr!!!

I strongly believe that I have to revise my favourite dessert ranking now! Gazillion thanks to Syomir Izwa for the recommendation.

Warning: We burped durian throughout the day. Don’t say we didn’t warn you. 😉