Yesterday I managed to watch Manisnya Cinta di Cappadocia for the second time. Yeap, you heard it right… I’ve already watched the movie twice!! (And it was the opening day!) For my review, I’m not going to talk much on the movie story line as I want to avoid spoiling the story for you.

Manisnya Cinta by Anis Ayuni is one of my favourite Malay novels of all time. I’ve read the book countless of times and I can even memorize  the whole storyline. Back in 2011, I was extremely excited when I read that Global Station had bought several novel rights, such as Adam dan Hawa, Jauh and of course, Manisnya Cinta. After more than a year waiting for the adaptation to materialize,  I was becoming curious on how come there was no update on Manisnya Cinta, especially since all the novel has been adapted to either drama series or tele-movie. Until one day, I read the news that Manisnya Cinta will be turned into a movie and will be directed by Bernard Chauly with Rafidah Abdullah in charge of the screen play. (Yay!) To make it more interesting, Fazura and Shaheizy Sam have been chosen as the lead role – Ifti Liyana and Nazmi. (At the time, they were still fresh from their drama series entitled Kisah Cinta.)

As an avid fan of the novel, I certainly had very high expectation for this movie. I must say I was a bit nervous when I discovered they changed the title to Manisnya Cinta di Cappadocia. What reaction was “What? Cappadocia?! What happened to Cairo, Egypt?!”  According to the novel, there were so many important things that happened in Egypt. But, I guess with whatever political things happening in Egypt, shooting there was definitely not an option.

In short, the movie is about Ifti who recently broke up with Fredo her boyfriend of 4 years. She caught him cheating on her with his secretary. Her family (her mom especially) was totally devastated over the news as Ifti and Fredo parents are old friends and uniting Ifti and Fredo had been their long time dream. At the same time, Ifti has been bumping into a guy name Nazmi, and she has been developing feelings for him. After bumping into Nazmi during a picnic, Ifti agreed to go with Nazmi on a date. When Ifti was assigned to  go Turkey, she was certainly surprised to yet again to bump into Nazmi there. After Turkey, Ifti and Nazmi became an item despite Ifti knowing very little about Nazmi. He is so secretive, that Ifti doesn’t even have his contact number. In spite of her best friend Via constantly doubting Nazmi (a ‘bus driver’ by profession), Ifti sticks to her feelings until one day she saw Nazmi with his wife and child. Without much deliberation, but with much heartbreak, Ifti immediately ended their relationship.

The chemistry between Fazura and Sam is amazing, that you’ll totally believe that they are truly in love with each other. I wish there were more scenes showing the development of Ifti and Nazmi’s relationship. I’m a bit disappointed on how fast they cut the relationship between Ifti and Nazmi after they got back from Turkey. I guess it was so good that I can’t get enough of it. 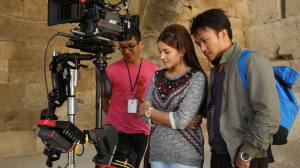 Manisnya Cinta is definitely the best/most romantic Malaysian movie of the year, with a sprinkle of drama to bring you to tears. There were 3 scenes that will easily move you; one being the scene of Aida (Ifti’s sister) death, second is the break-up scene between Ifti and Nazmi,  and last but not least the part when Bakhtiar (Ifti’s ex bil) took Aiman (Ifti’s nephew) to his mother’s grave.

I sincerely think that this is Fazura’s best performance by far. You’ll see the mature side of her, as Ifti Liyana’s character has to deal with so many conflicts and Fazura definitely carried the character well. The break-up scene definitely believable that you can actually see her channeling her whole emotion. But she still cute nonetheless.

The dinner scene where Nazmi asked Ifti to be his steady girl friend is totally memorable. Sigh… it was so SO romantic, that I totally forgotten the original proposal from the book. Sam is such a versatile actor that he adapted to the romantic role pretty well.

This movie is also supported by a star-studded cast with Lisa Surihani as Ifti’s sister Izelea, Ogy Ahmad Daud as Ifti’s mom, Josiah Hogan as Fredo, Eja as Aida and Faizal Hussein as Bakthiar.

Another amazing portion of this film is the cinematography. Turkey, Cappadocia specifically is totally mesmerizing. I really loved the natural lighting used for the hot air balloon scene that seem to create a soft focus effect. Sigh, I am now annoyingly (as usual) asking CheeseBoy to take me to Cappadocia. (CheeseBoy: *rollingeye*)

In summary, Manisnya Cinta di Cappadocia is a definite must watch. Big congratulations to Bernard and team *clap,clap*. So, what are you waiting for? Go get your tickets now peeps!

Below are two clips from my favourite scenes from the movie:

P.S: I’m going to watch the movie for the third time tomorrow 😉

Special note: Thanks so much to Red Films for the special screening invitation. Farid and Sharon, you guys are awesome!