I’ve been a cranky MU fan every since the new league started. Two draws and one loss to traditionally weaker teams was simply unacceptable to someone who have been following MU for like forever. Was seriously hoping that Louis Van Gaal can improve the team almost immediately, after a disastrous 2013 season. 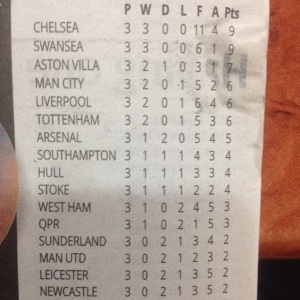 Finally Man United have redeemed themselves. A 4-0 win against Tony Fernandes’ QPR at Old Trafford is a good turning point. The team started to gel together. A combo of Rooney, Di Maria, Van Persie, Mata at front proved to be lethal. Hence, the goals from Di Maria, Herrera, Rooney, and Mata. The new signing, Falcao, also made his first appearance. Old Trafford gave him a rousing applause when he got off the bench and started warming up. Goes to show how one’s reputation can precede them. Here’s hoping that one day Falcao can be as talismanic as Cantona.

Defensively, MU is still disappointingly loose. QPR’s Vargas constantly threatened with runs and attempts. And that’s only one striker! Imagine if MU defense faced the strikers from Chelsea or Man City! De Gea won’t be able to stop the goals if MU defenders can’t buck up at the back. (Oh Vidic, how we have missed you. Hate to admit we miss Rio Ferdinand too.)

You may want to read this too:

Manchester United: The Reign of LVG