But once I completed the first film, I immediately watched the second Hunger Games: Catching Fire. It was wayyyy better entertainment. The story began to pick up and the direction more polished. It was leaps and bounds better than the first film. Jennifer Lawrence’s (Katniss Everdeen) character development is more apparent as she grew from a normal girl with potential, into the rebel leader that she could be. (Reminded me much of The Matrix’s Thomas Anderson into Neo.) 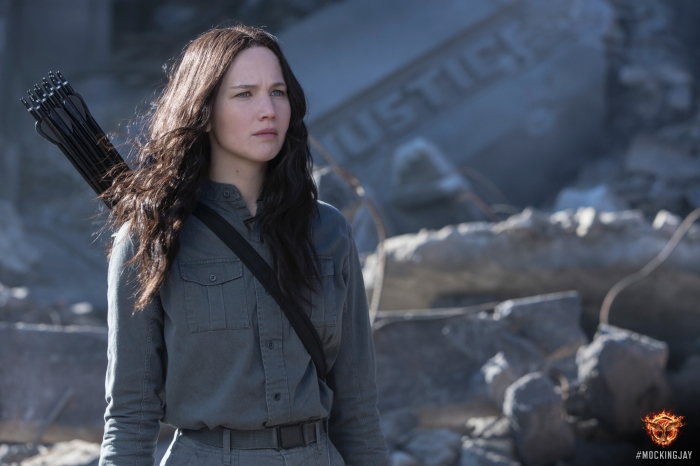 Anyways, we finally caught the third installment, and our verdict is an enthusiastic 4 stars!

Here’s my 7 point review:
1. Katniss wakes up and discovers that she has been taken to District 13, and appointed as the poster girl for the rebellion. Meanwhile, Peeta and the other victors were taken hostage is the Capitol.
2. Katniss resists being the symbol, but changes her mind after seeing for herself the death and destruction wreaked upon her hometown of District 12 and other districts caused by The Capitol.
3. Katniss gets President Coin (Julianne Moore) and Plutarch (the late Phllip Seymore Hoffman) to agree to rescue Peeta and the other victors. In return, she transforms into the Mockingjay.
4. Battles ensues, dams were blown-up and a special force team led by Thor’s brother went into the Capitol to rescue Peeta and others.
5. Rescue was successful, but it was suspiciously easy.
6. Katniss went to see Peeta in the recovery room, only to be viciously attacked by Peeta. Turns out Peeta has been re-programmed to kill Katniss.
7. To be continued.

The main reason to watch this film is simply the acting. J-Law’s acting is just plain insanely Oscar-worthy good. (You’ll know it when you see it.) Julianne Moore and Phillip Seymour Hoffman also gave rousing performances. The action was limited, but I’m sure we’re going to see more stuff in Part 2. By the way, don’t miss J-Law singing ‘The Hanging Tree’ in one rebellion scene. The song will stick in your brain. (Dammit J-Law, you can act AND sing!)

There was an error retrieving images from Instagram. An attempt will be remade in a few minutes.