It was another day of when both CheeseBoy and I felt tired (so no cooking at home), and we decided to make detour before headed home. This time around we decided to make a pit stop at Bangsar. CheeseBoy and I used to run a business that operated in Bangsar. Hence, we always go back to Bangsar for some good old days memories. After dinner, I suggested to CheeseBoy for us to go for a walk. Hehehe…walking here means making one big round at Bangsar Village 😛

As we walked, CheeseBoy suddenly got very excited (he usually doesn’t get excited at the malls) as he saw the new Lego shop. Some damage done at the Lego shop, and CheeseBoy hinted things he want for anniversary gift 😛

After Lego,  we decided to stop for dessert and that was when he suddenly got the idea to be “creative” with his newly purchase Lego figurines. Hehehe…actually this is not the first time CheeseBoy tried to be creative with Lego. Here is another picture when he was so called being “creative” with Lego figurines 😛

I seriously find this disturbing, particularly when my Lego Moleskine was part of the props. He said it’s an accident scene.

Anyways, here are some behind the scene pictures from Lego Battle – (Superman vs. Darth Vader)

The cast and the prop

Yeap, he laughs at his own jokes! 😛 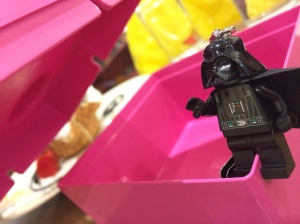 For this scene, I actually have to hold the lego container cap. Duh!

And because he insisted on completing the “movie”, my ice-cream melted before I get to eat them! Gggrrr… CheeseBoy is so lucky that I love him 😀

If you can stand lame jokes, check out CheeseBoy’s post Lego Battle [Superman vs Darth Vader]