Birthday presents keep coming in despite my birthday was over almost 4 weeks ago. So I guess it is not to late for me to post something on my birthday celebration 🙂

Well, unlike last year this year I actually had to work on my birthday *tears*. Suddenly, two urgent meetings popped-up and I had no choice but to cancel my leave (but  that means more leaves to carry forward next year though, yay!) . Realizing that I’m gonna have a busy day on my birthday, I decided to go to bed early.  However, my ahem, ‘beauty’ sleep was disturbed by CheeseBoy who insisted on wishing me at midnight. After unwrapping my birthday present, I certainly didn’t mind at all being dragged out of bed. Love the gift Sayang!

He got me the polaroid camera, cool eh?

Since my sleep was disrupted, I had problem sleeping after that. Reached office pretty late that morning, and I just dropped my stuff at my cubicle and I quickly rush off to meeting room. While in the meeting I received an iMessage from CheeseBoy. 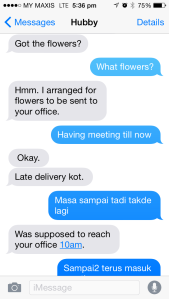 By the way peeps, the flowers he got me was really  beautiful. But so sayang the surprise tak jadi 🙂 Hehehehe…been telling him to not to arrange any surprises for me cause they normally don’t work out.

After I’m done with both meetings, I was shocked that I was being summoned to the conference room again. (Baru nak mintak balik awal!) Come on Boss, I have dinner reservations at Nobu!) But luckily, it was a surprise celebration for me. Hehehe…thanks colleagues 😀

Ignore my clown face, not used to being centre of attention 😛

Anyways, we had a blast at Nobu. Price was really steep, but the food was really good. Definitely a memorable experience for us.

This salmon and caviar dish is totally delicious. Period. 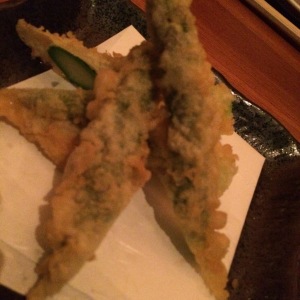 This black cod was the bomb! Cost us RM160 though. (The cod that I had at Rakuzen during recent visit doesn’t taste that good anymore 😛 ) 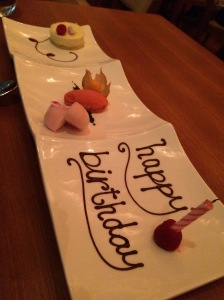 Cheese cake for Cheese Boy while Mochi & Raspberry Sorbet for me. 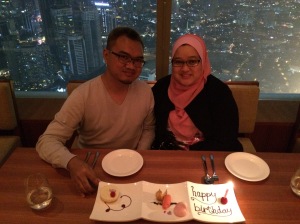 Thank you again to CheeseBoy for putting so much effort specially the part where he took the day off to spend quality time with me but the Birthday Girl eventually had to go to work.(I love you lots, monkey!)